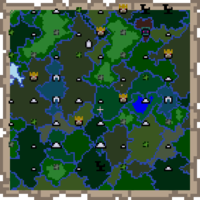 A Magic Map that has been filled in completely.

The Blank Magic Map is an item added by the Twilight Forest mod.

It allows the player to map the surrounding area while in the Forest by simply Right-clicking it, this changes its name to Magic Map #0; the number being sequenced for each map charted. This shows the map in the Players hands as it is been drafted (look down for a close up).

A single Map can chart an area of 128×128 chunks (16,384 chunk2), or 2,048×2,048 meters (over 4.1 million m2). It also displays major Twilight Forest Landmarks such as the Hedge Maze, the Hollow Hill and the Naga Courtyard, denoted by an icon on the Map [1]. The Map also has a very large mapping area and spawns fully zoomed out, making it a very useful tool. 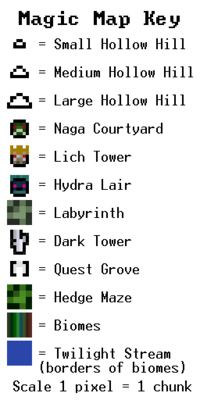 A key to the Magic Map.

Blank Magic Map has no known uses in crafting.

This page was last modified on 18 February 2019, at 13:42.
Content is available under Creative Commons BY-NC-SA 3.0 unless otherwise noted.