Aura Node is a block added by the Thaumcraft 4 mod. It is one of the main blocks in Thaumcraft 4. It can hardly be seen if not wearing Goggles of Revealing, Helmet of Revealing, Void Thaumaturge Hood, Draconic Helmet or other helmets able to see the nodes. Another option to see it is to look at it through Thaumometer.

It can only be created by using Wand Focus: Primal with a tiny chance, by growing Silverwood with small chance, with items from Nodal Mechanics and Technomancy addons to Thaumcraft 4. It cannot be collected by breaking it, even with Silk Touch.

It can be collected by breaking it with Vajra or Force Wrench, moving it with Spatial Pylons from Applied Energistics 2, Transposers from Blood Magic, Transvector Dislocator from Thaumic Tinkerer 2, Rftools Builder Block and some other items. It is intended to be moved around by transforming it to Node in a Jar and backwards. Look the linked pages for more details on how to move the nodes.

Auras and Nodes
Magic is everywhere

Research aspects in this item

All of the aspects the node contains. Each node can only be scanned once. 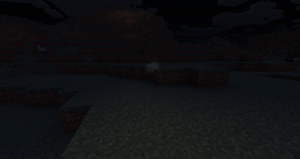 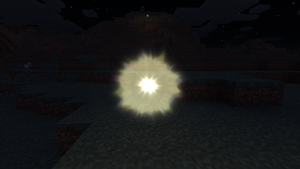 "The Aura is a field of magical energy prevalent throughout the world. Its origin is unclear. Some believe it is the accumulated life force of living beings, while others believe it to merely be another type of energy seeping in from some other place. The last theory seems to be most likely, as the aura is often found surrounding a node of concentrated mystical energy known as an Aura Node.

Each aura node has a base amount of magical energy it can contain and this energy is aligned to one or more aspects. It is usually aligned to Primal Aspects, but rarely a node may contain Compound Aspects.

The aspects within an aura node can be tapped by a thaumaturge for his own purposes. The simplest way to do so is with the use of a wand.

Energy that has been harvested in this manner is known as vis.

Aura nodes are hard to see with the naked eye, but faint glimmers of light often betray their presence. The Thaumometer makes nodes slightly easier to find, as looking through its lens makes them clearly visible.

Important: Caution must be taken when draining a node. There is a small chance that when a specific type of aspect within a node is completely drained, it may disappear or harm the integrity of the node.

It is possible for the node to disappear completely if all the aspects are used up.

Fortunately most nodes replenish their aspects over time and if properly maintained can provide a clever thaumaturge with all the vis he could want.

Nodes react in interesting ways to other nearby nodes and bigger nodes tend to drain the vis out of their smaller neighbors to increase their own girth."

Aura Nodes come in these types:

This is just a regular node. It is most common and does not have any special functions. 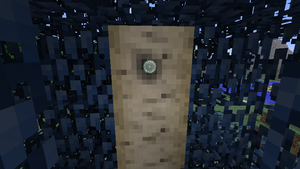 This node has 1.67% chance to spawn in the world and 100% chance to spawn in Magical Forest biome. Also it is commonly found in Silverwood trees, almost each tree naturally grown has this node, some trees have several nodes inside. When placed in the world, this node will slowly change the biome it is in into Magical Forest. It also stops Tainted Lands from spreading if planted nearby (not inside).

This node has 1.67% chance to spawn in the world. It will not generate Vis, but it will generate XP points and drop Vis points as if a mob was killed nearby. It will eventually disappear. 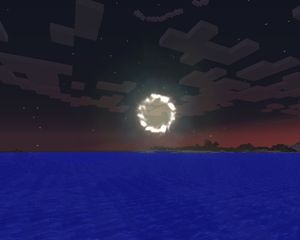 This node has 0.56% chance to spawn in the world. It will destroy nearby blocks except Obsidian and suck in the drops and entities. Drops eaten by this node get destroyed and their aspects melt into primal form and have a tiny chance to be added to the node's aspects. It is known that it is possible to grow such nodes to 500+ vis by just feeding them with items.
Be very careful when close to this node. It is very hard to get out, and the last thing you want is to break it. If you die near it, it will suck all your drops inside and destroy them, probably growing several Vis up.
For some reason it is a tradition of top Thaumaturges to hold at least one of these nodes at base and use it as a trash can. These nodes are also extremally rare and expensive on servers. And finding a Bright Hungry Node is considered as extreme luck.

Aura nodes can have these modifiers, known as brightness values:

These nodes are most common, they have no special properties.

These nodes are very strong. They generate Vis at a double rate, special nodes can spread or combat biomes at double range and Hungry Node has a double sucking range and much higher damage dealt to mobs.

These nodes are weaker than normal ones. They generate Vis at a halved rate, special nodes can spread or combat biomes at halved range and Hungry Node has a halved sucking range and less damage dealt to mobs.

These nodes are very weak. They do not generate Vis, do not spread or combat biomes and almost don't suck items in. They are usually fully drained by Thaumaturges right when found. This makes them disappear.

Aura nodes contain at least one type of Aspect, and the maximum amount is not limited. Each aspect in the node has 2 parameters: original value and current value. Aspects tend to restore their current value to original value. Current value can be lowered by draining the node, letting other node to drain it or charging the node. It can also be increased by letting other nodes to be drained by this one or by natural node regeneration property. Original value can be lowered by moving not full node or by fully draining one type of aspect. This aspect has a chance to disappear from the node. Original value of Hungry Node can be increased by feeding it with items. Nodes usually have only primal Aspects, compound ones are very rare.

The type of the aspects and their original amount followes these rules:

Some Thaumcraft machines need certain Vis, so nodes should be placed nearby and charged to provide them. And having just one node for all the machine's needs is always better than having 2-3 nodes. The following nodes are counted "perfect" is they contain all of these aspects, no matter what their value is:

Main purpose of Aura Nodes is to charge wands. Only primal aspects can be drained by wand. What is drained is called Vis. Vis is not Essentia, it is some sort of charge, and wand acts as a battery, while node acts as a generator. To drain Vis, hold right-click with wand in hand while pointing it at the node. Vis will be transferred to the wand. It is highly recommended to research Node Preserver before draining nodes. This will leave 1 of each aspect on node, so you will never destroy them, unless you hold shift while draining. Researches Advanced Node Tapping and Master Node Tapping boost draining speed. Some wands, like the one capped by Mechanist's caps from Thaumic Exploration can drain Vis even faster.

Nodes can also drain each other, if one is placed in the radius of 5 blocks from another. Draining will happen if the nodes differ in size by 4 or more Vis. Then Vis will very slowly get drained by the bigger node from the smaller node. Hungry nodes drain much faster. Doing so, you can grow very big nodes, but only square root of what they drain becomes their charge. However, they will regen this extra charge after the charge is drained by player.

Don't think by this that you must keep getting nodes to feed only one. Say, you get a node with all of the aspects you want to put in your "super node" but are tired of destroying every node on the planet just to feed one. A better way is to place a node stabilizer under the 'food" node after it is placed. Next, place a lever by the node stabilizer so you can turn it off when you want to "feed" the "super node". Then when the food node is fully charged again, you can flip the lever and let the main node feed. Also, watch the node, for if the food node runs out of an aspect, it could lose it and all of this would be for nothing. When the food node is at 2 of an aspect, flip the switch to protect the node as it recharges. It will actually charge to the full amount it had before you first removed the stabilizer field. When it is fully charged, just flip it again to feed the node again, potentially allowing you to get infinite vis. "Don't kill nodes, torture them to the point where they almost die, then let them recover."

Upon breaking the node will drop their power divided by 10 Ethereal Essences (rounded up) corresponding to the aspects found inside the node. Additionally the node will be fully destroyed from the world forever. You can break nodes by punching them with an empty hand. It is not recommended though.

Advanced Thaumaturges need many nodes to harness Vis from. To prevent their base biome from changing to Magical Forest, Eerie, Tainted Lands, and to prevent the nodes from draining each other while standing in one small area around a Wand Recharge Pedestal or any other nodal machine, Node Stabilizers are used.

Use Advanced Node Stabilizer only if you are growing a perfect or incredibly large node, otherwise it will only make problems.

More information on the pages of these machines.

Some machines need not Vis but Centivis (CV) of a certain aspect to power them constantly. For this you need to transform the node into a charged node by placing a Node Transducer above it and Node Stabilizer below and powering the machines.

More information on the pages of this machine.

Aura Node can be used to create the following items:
Categories:
Hidden category:

This page was last modified on 16 June 2018, at 22:43.
Content is available under Creative Commons BY-NC-SA 3.0 unless otherwise noted.