Arcane Bore is a block added by the Thaumcraft 4 mod. It allows for automatical mining in the cylinder with the radius of 7 blocks in one direction. The mining speed can be configured and several enchantments can be applied to the Bore.

To setup the machine, the player needs: 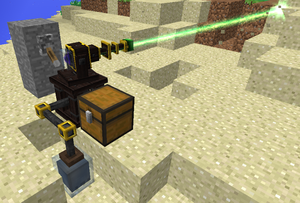 The mining speed can be configured and several enchantments can be applied to the Bore.

Research aspects in this block[edit]

"You have discovered a device capable of extending the range and power of an Excavation focus. Of even greater use is the fact that the machine can do so without your constant supervision. You merely need to place it on a specially constructed base, point it in the right direction with a wand and apply a redstone signal.

The arcane bore requires two things to function. The first is an excavation focus placed in its leftmost inventory slot. Any enchantments applied to the focus will also alter the functions of the bore.

Secondly you need to place any kind of pickaxe into the rightmost slot. The material of the pickaxe will have little effect on the operation of the bore, but the greater its durability, the longer it will last. Like the wand, any enchantments or special abilities of the pickaxe will also be applied to whatever the bore mines.

An arcane bore can only be placed above or below an arcane bore base. Any items mined will be ejected from the base in the direction its nozzle is pointing.

It will eject into an inventory if possible. This direction can be changed with a wand.

The bore can be powered with Perditio essentia or vis which will greatly speed up the rate at which it mines. Vis or essentia can be provided by pipes and/or relays as normal.

One point of Perditio essentia will speed the bore for the next 20 blocks mined. Alternatively 5 CV is required per block mined and the bore can accept up to 100 CV per tick."

Arcane Bore (Thaumcraft 4) can be used to create the following items:
Categories:

This page was last modified on 9 September 2016, at 20:55.
Content is available under Creative Commons BY-NC-SA 3.0 unless otherwise noted.