Eldritch Dimension aka The Outer Lands is an endgame dungeon-type dimension added by the Thaumcraft 4 mod. It is completely empty by default, and for each Eldritch Portal the player opens a new maze-like dungeon generates in this dimension. The dungeons for each Eldritch Portal are independent and therefore cannot be accessed from one place. Flying is disabled in the Outer Lands.

This article provides general information about the blocks, structures and mobs described here. For more information, click on the blue name of the wanted page and read the detailed article about this particular mob or block.

The maze-like dungeon, generated as the player opens the Eldritch Portal (maze further in the article) mainly consists of the following blocks:

The maze mostly consists of countless corridors, which lead to rooms or to dead end. Corridors have 5x5 empty space for the player to walk, rounded from 4 corners with Ancient Stone Stairs. This is packed in Portal to Nothing and then in Bedrock. Same applies to the shell of all other rooms in the maze, so further only the information about the internal content of each room is given. 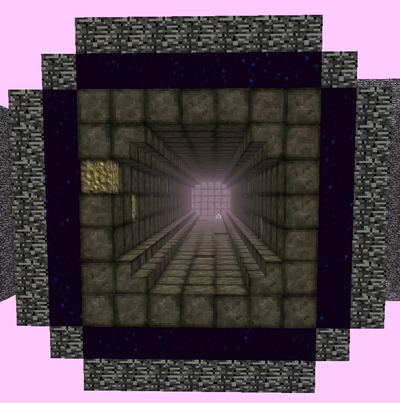 This room generates at the entrance of the maze. It contains one Eldritch Portal which the player can use to return to home dimension. 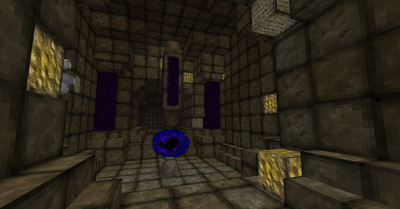 Crossings generate where several corridors come to one place. They do not contain anything but have a larger space.

View on Crossing and on Crusted Opening 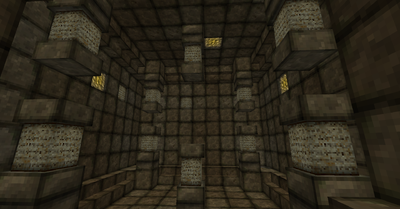 This is a corridor with lots of runed stones (Ancient Stone which zaps the player with a small lightning bolt when the player passes nearby). This corridor is especially dangerous to fight in, as the bolts partly ignore the armor. The bolts also add a temporary Warp to the player, so experienced thaumaturges use this part to greatly speed up the progression through the Eldritch Tab in the Thaumonomicon. 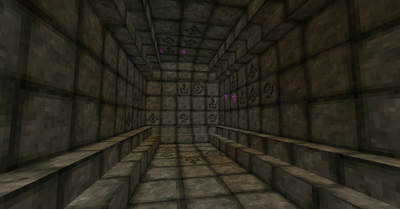 This room contains of lots of Crusted Stone with Crusted Openings, which continuously spawn Eldritch Crabs before destroyed. These rooms are full of Strange Crystals and contain several Old Urns and Abandoned Crates. However, because of the large number of hostile mobs constantly spawning here, this room is not recommended for an inexperienced player, as they can die here quickly.

This is a part of the corridor that is blocked with Crusted Stone. There are no Crusted Openings in this part, but the corridor bends 90 degrees either left or right, depending on which side you came from. Inexperienced players sometimes fall in Portal to Nothing and die while cleaning this blockade. This is the only 100% safe way to obtain Crusted Stone. 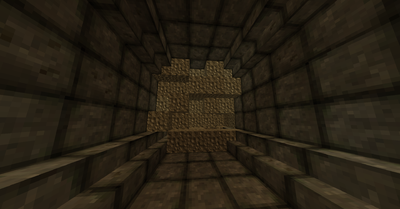 This is a part of the corridor which has lots of Cobweb and a Monster Spawner which spawns Mind Spiders. The spawner is somehow unique and is better to be transported to the base to grind these mobs.

This is a corridor with lots of Fibrous Taint and some tainted plants in it. This part will eventually spread to all maze, but this will take hundreds of hours of loading the chunks and usually never happens. 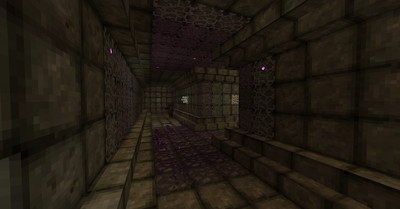 This is a key room for the maze. It contains a capstone with Runed Tablet on it. This room has also some rare Ancient Rock blocks. The room is guarded by 4 Eldritch Guardians. The Runed Tablet is actually a drop, and when playing on a server with the plugin which removes drops, can be removed by the plugin leaving the maze without a single key to open the boss room. 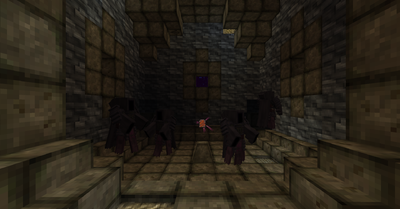 The boss room is separated from the other part of the maze by Ancient Doorway. it can be opened by inserting Runed Tablet in it. This prepares the boss room by placing the objects inside and spawning the boss. Look the images below for the stages of opening the doorway.

Boss room contains different objects depending on the type of boss spawned in it. 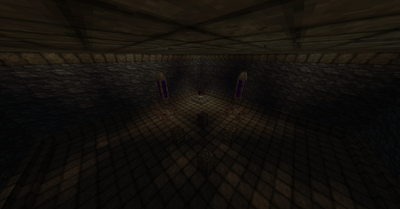 View on the boss room for Champion Eldritch Guardian

This room will spawn very dark, for the better look of glowing red eyes of the Champion. It will consist of 1 small pedestal the Champion spawns on, 2 Eldritch Portals with 4 Old Urns around each, and also 4 Runed Ancient Stones which are meant to charge the Champion while on 2nd stage. 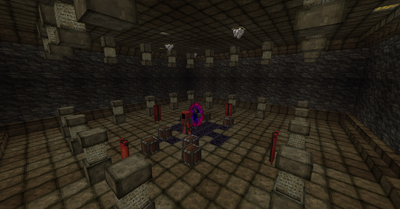 View on the boss room for Crimson Portal

The portal will spawn in a very bright room with many Glyphed Stones on a small part covered with the blocks from Ancient Doorway. The portal spawns directly in the middle, and places the banners and crates symmetrically.

View on the boss room for Giant Taintacles

The boss room for Giant Taintacles will also be very dark and fully covered in Fibrous Taint and other tainted blocks, making the movement very hard. At first only 2 of 4 taintacles will be giant, but then the 2 other will grow. The taintacles on the screen had both Spined ability, so if the screenshot was taken in Survival, this would make the battle extremely hard, as the player could not use even ranged weapons against them.

If Thermal Expansion is installed, Basalzes will also spawn in this room, making the battle even harder.

This room is dimly lit, but still better than the tainted one. It has lots of Old Urns and Abandoned Crates as well as 3 Eldritch Portals which assist the boss in battle.

As the dungeon is maze-like, the time consumed on completing it can scale from 2-3 minutes to 5 hours or more. Below is a guide on how to explore the maze in the least time possible.

This allows to complete the dungeon in less than 5 minutes.

This allows to gather 100% of the loot in about 4-6 hours. The dungeon does have a lot of loot.

The dungeon consists of ~50 000 blocks which can be mined. This is usually more than enough for the most demanding builder.

The Crusted Nest gives about 1 crab per second, this is roughly 4-5 times better than a Blaze spawner XP grinder. 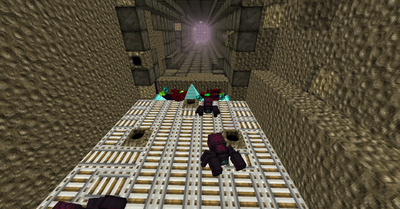 Example of such grinder

If place to live in:[edit]

This page was last modified on 3 March 2018, at 23:48.
Content is available under Creative Commons BY-NC-SA 3.0 unless otherwise noted.