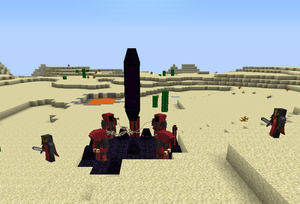 When found in any difficulty setting other than Peaceful, it will spawn 4 Crimson Clerics standing on the 4 corners of the platform and emitting black particle beams towards the Dark Aura Node in the center which is meant to stabilise the entrance allowing the members if Crimson Cult to travel to the Eldritch Dimension and back without opening the portal. Player cannot use this technique though.

The Crimson Clerics who stabilize the node, will ignore the player, but the Crimson Knights spawned by them will not. Furthermore, after any of the knights is attacked, all the clerics will stop stabilizing the node and attack the player.

This all allows for a brilliant auto-spawner to be made from this type of Eldritch Portal.

This page was last modified on 21 April 2019, at 21:36.
Content is available under Creative Commons BY-NC-SA 3.0 unless otherwise noted.