Eldritch Crab is a mob added by the Thaumcraft 4 mod. It does not spawn naturally in the Overworld, but it does spawn in Eldritch Dimension from Crusted Openings and after killing Shambling Husk. The Crusted Opening can be found in Crusted Rooms and in Coridors. It acts like a spawner, but spawns only one mob at a time on the block next to the opening side.

After Shambling Husk dies, a special version of Eldritch Crab spawns, with its body covered by a helmet, which has 10 extra health. This is because the Shambling Husk is a Crimson Knight who fought the Eldritch Crab and failed. The crab has eaten his head out and parasited on its place, ordering the dead body to move like a Zombie. Sad truth of Exploring Eldritch Dimension.

The crab is 1 block tall and 1 block wide. It has the same moveset as a Cave Spider, and can also jump for attack to a player. If the mob succeeds in this attack, it will not fall to the ground, but will hang on the target's head, continuously dealing damage. It is also completely invisible from the normal point of view, the player has to look straight up to see the mob and kill it. Some mobs are unable to do this and die after some time. Using the crabs is a good tactic against Crimson Portal, as they will greately distract and damage the cultists.

The Ender Pearl is actually their eye. These properties of the pearl are also used in construction of the Eldritch Construct. 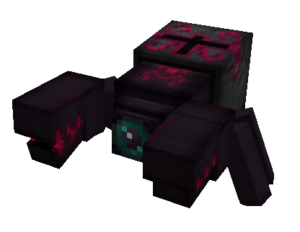 This page was last modified on 29 May 2016, at 19:52.
Content is available under Creative Commons BY-NC-SA 3.0 unless otherwise noted.