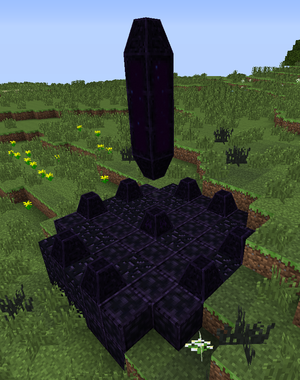 Eldritch Portal is a structure added by the Thaumcraft 4 mod. It consists of:

If the player tries to mine any of the following blocks of the structure: Eldritch Altar, Eldritch Obelisk, Eldritch Capstone, all the rest of these blocks will explode, destroying no other blocks but themselves and leaving no drops. These blocks can be moved by Spatial Pylons, Teleposers, Transvector Dislocators and other similar blocks though.

Eldritch Obelisk consists of 2 type of blocks with metadata of 1 and 2 respectively. First block with metadata 1 has the collision box of 1 block, but it carries the texture and the animation of the Obelisk. The other blocks have metadata 2 and they do not do anything other than take the space with their collision box. So, only the bottom-most block of the Obelisk can be moved, and here you have it - awesome unique decoration no one else does have. 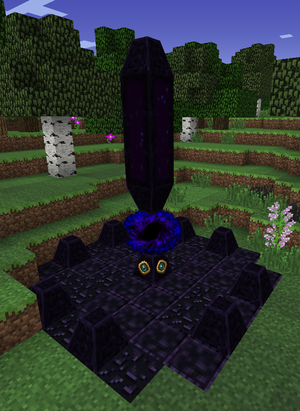 This requires the player to have the research Opening the Eye completed. It is located in Eldritch Tab. See Warp page for more info on this tab and its requirements.

Portal as a Mob Grinder[edit]

Dark Aura Node in this structure can spawn 2 mobs: Eldritch Guardians and Furious Zombies. If it spawns zombies, and you want to farm them, which is not recommended, break everything but the Node and build a normal mob grinder, counting the node as a Monster Spawner.

If it spawns Eldritch Guardians, you are lucky. Here is the strategy on how to get the most efficient grinder:

Can be used to auto-spawn Eldritch Guardians and Furious Zombies and to travel to Eldritch Dimension.

This page was last modified on 3 March 2018, at 23:58.
Content is available under Creative Commons BY-NC-SA 3.0 unless otherwise noted.