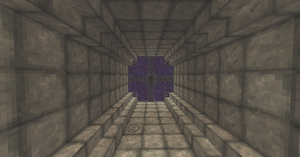 The Ancient Locking Mechanism block can be picked up in creative with middle click or in survival with Vajra. Placing it anywhere else in the Eldritch Dimension and activating it again will completely wipe everything in the nearest boss room and then spawn a new boss and new blocks inside. However, activating it in any other dimension will cause the world to be corrupted without any opportunity to be restored.

Ancient Doorway has no known uses in crafting.

This page was last modified on 21 January 2018, at 08:02.
Content is available under Creative Commons BY-NC-SA 3.0 unless otherwise noted.