The Crop is the core of IndustrialCraft2's Agriculture system and is used in the production and crossbreeding of plant life. Crops must be placed on tilled soil and will only accept Seed Bags and certain types of vanilla seeds. Two Crops may be placed on the same block to create a double-Crop. Double-Crops are used for crossbreeding.

Crops must be placed on top of tilled soil. Crops placed above soil which is hydrated from nearby water will have added benefits while growing. If the tilled soil the Crop is placed on gets trampled, the Crop will uproot itself and lose the plant, its seeds, and its produce.

Once placed, Crops may be right-clicked with seeds to plant them. Vanilla seeds of the following types can be used before Seed Bags are acquired: Wheat Seeds, Melon Seeds, Pumpkin Seeds, Sugar Canes, Roses, Dandelions, Nether Warts, Carrots, Potatoes and Mushrooms (of both kinds). For Roses, Dandelions and Mushrooms, four of the item are required per Crop. More plant types exist but must be obtained though crossbreeding and are only available as Seed Bags. 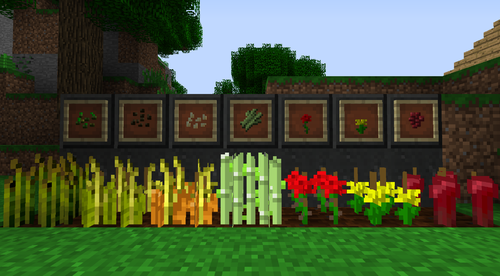 After seeds have been planted on a Crop, the growing plant can be right-clicked with certain items to influence its Growth, Gain, and Resist properties. Every few minutes Fertilizer, Bone Meal, Hydration Cells, and Weed-EX may be applied. Everything but Bone Meal can also be administered automatically via a Crop-Matron.

Upon reaching maturity, a plant may be harvested for its produce. The drop chance for its seeds and produce are determined by the plant's properties. The three collection methods are:

Every Seed Bag and plant has a Growth, Gain, and Resist property; each of which has its own pros and cons.

Increases plant maturing speed and cross-breeding speed but also increases the chances of weeds spawning on nearby Crops.
When Growth reaches 24 and higher, the plant begins behaving like weeds by destroying nearby crops. For a reasonable crossbreeding comfort zone, a Growth value between 20 and 21 is recommended.

Increases drop chances of each harvest but decreases the Seed Bag drop chance for values greater than 23.

Increases the plant's resistance to weeds, trampling and poor conditions. Increases the chances of dropping at least one Seed Bag. Increases the time to crossbreed with other plants when greater than 27.

Crop can be used to create the following items:

This page was last modified on 14 July 2019, at 16:13.
Content is available under Creative Commons BY-NC-SA 3.0 unless otherwise noted.