Bee Breeding (also known as Apiculture) is a mechanism introduced in Forestry, used to create new types of Bee Species from old ones. Bees can be harvested from glowing beehives which spawn naturally in the world. A Scoop, Thaumium Scoop, Manasteel Scoop, Bedrock Pickaxe (Extrabees-Hives won't drop bees, they will be silktouched), Mining Laser, Vajra, Quarry,  Ars Magica 2 Dig spell, Atomic Disassembler, Wand of Excavation or Wand of Equal Trade is necessary to extract the bees - breaking a hive with anything else will drop nothing.   Each type of wild Beehive spawns in specific biome(s).

To begin breeding bees, one Apiary, a selection of wild bees, and at least one of their preferred "flower" is required. A Beealyzer is highly recommended; it is not possible to see what genetic traits each bee is carrying without one, and it will reveal important information such as climate and flower needed. The Apiarist Database, which tracks which species have been acquired is useful but not mandatory to begin. One easy way to acquire some Apiaries and other useful materials is to find a Village with a resident Apiarist. Apiarist Villagers will trade 24-26 logs for Apiaries, two wheat for a random comb, one princess for an emerald, and one emerald for six Proven Frames.

Frames are fairly easy to make, needing only a Carpenter and Seed Oil at most. Up to three frames can be placed in any Apiary, or one in a Frame Housing Alveary block. The first three types all boost production by 10%, varying only on how quickly they lose durability.

The Extra Bees mod adds a variety of advanced tools and options onto the basic Forestry system. The Alveary is a larger multi-block version of the Apiary. It allows the climate within to be tailored to the species being cultured, and other special features with purpose specific blocks. An Alveary is quite expensive in terms of resources, requiring Honey, Seed Oil, Royal Jelly, Pollen and Beeswax in addition to large amounts of wood. It is not possible to create one without fully exploring several branches of the bee species.

Other types of Frames are added by Extra Bees and affect breeding, production and/or lifespan. While Chocolate and Soul are the most useful, Extra Bees also adds Healing Frames and Restraint Frames (and Nova Frames, but they are unobtainable without cheating).

Extra Bees also contains many advanced machines that allow manipulation of genetics or alteration of bees directly without resorting to the semi-randomness of breeding. Due to the crafting components necessary and that multiple types of machines need to work together, most are mid-to-late game acquisitions. 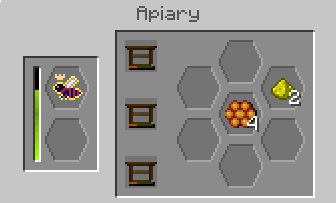 A Demonic Bee Queen in an Apiary with three Chocolate Frames. The Drone slot below her is empty, lifespan bar to the left.
To start the breeding process, place a princess and a drone into an Apiary or Alveary. They will be replaced with a queen of the same type as the princess; the drone is lost in the process. The progress bar on the left will decrease over time, but only if the Apiary is located in a biome favorable to the queen. When the lifespan bar reaches the bottom, the queen will die and produce offspring - one princess and one or more drones. The number of drones is dependent on the fertility trait of the queen. The traits of each new princess and drone will be a combination of the parents used. If a partial mutation occurs, creating a hybrid, the resulting offspring will have traits of the new species mixed with the parent bees'.

Each bee species has its own Produce, which is permanently linked to the species. A Common bee will always make Honey Combs, a Tropical Bee Silky Combs, etc. Hybrids will yield produce of both species. Produce is usually one or more types of Comb, and possibly a secondary Specialty product as well, such as Pollen, Royal Jelly or Glowstone Dust. Most species have only one product. How quickly a hive produces items is dependent on the Queen's active Speed trait. Certain types of Frames can also improve production speed, as does housing the queen in an Alveary. Products can be piped out of Apiaries or Alvearies with Pipes, and Autarchic Gates are capable of reacting to missing bees. The Apiarist's Pipe is particularly useful in separating items from bees or fully automating a hive, though depending on how you want to handle mutations, a Diamond Transport Pipe may work more efficiently.

Every bee tick (550 minecraft ticks, or 27.5 seconds), the bee has a chance to produce items. This is calculated separately for each item type the bee produces. The chance is given by the following formula:

P is the probability of the bee producing items during this tick. If P >= 1.0, then the bee will always produce items every bee tick. Bee speed is determined by the "Speed" trait of the queen, using the following table for the conversion:

The production modifier is determined by the following algorithm:

The last variable, item probability, is a constant value for each type of item produced for each bee. For example, for industrious bees, the item probability is 0.2 for honey combs, and 0.15 for pollen.

Once every 27.5 seconds (the length of a cycle) this formula is checked and the bee has a chance of producing an item. Any frames in an Apiary/Alveary also take one point of damage, five if in an Alveary.

Bees have "chromosomes," which carry their traits, such as their species and other attributes. These traits can be combined to get desired breeds and abilities. For instance, if you have a slow Industrious breed with a valuable produce, you can crossbreed it with a faster Cultivated breed, to try and get a strain with both benefits. In the Beealyzer and Apiarist Database, dominant traits are color-coded red and recessive traits are blue.

Inheritance follows basic Mendel genetics. When a princess or drone is created, two genes are picked for each trait, one from each parent with equal odds. By selecting which drones and princesses to pair together, you can influence what traits the next generation of bees will carry. Because genes are picked from the parents (princess and drone) at the time of mating. altering a queen bee does not guarantee that the next generation will have the altered traits. More information on the laws of Mendelian inheritance can be found here.

Inheritance alone will not produce the more advanced species of bees in Forestry. Mating the right combination of bee species has a chance of creating a new species - a mutation. Some mutations can also only occur in specific biomes, and the odds of a viable combination mutating vary by species, from 2% to as high as 40%. Soul Frames will increase the odds of a successful mutation. The right combinations can be discovered using available in-game tools, the Bee Species page, or through trial and error. Here are a few tips that may help:

Bees have something resembling an actual genome complete with "chromosomes" and "alleles". Most traits of a bee are freely inheritable between species, only a few defining ones (produce, temperature and humidity) are tied to the species of the bee. Each of these chromosomes consists of an active and an inactive gene. The active traits are those the current queen will have, while inactive traits (and all drone traits) are only useful as inheritance for the next generation.

Note that many of the best traits are only available with species from Extra Bees and/or Magic Bees.

The following grid summarizes some of the possible combinations to begin on the Cultivated / Noble Branch.

This page was last modified on 8 February 2020, at 18:45.
Content is available under Creative Commons BY-NC-SA 3.0 unless otherwise noted.