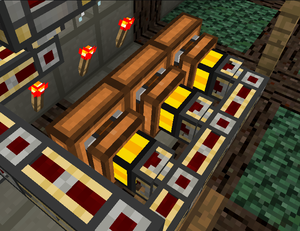 The interface of a Biogas Engine filled with Seed Oil and Lava.

The Biogas Engine is an engine added by the Forestry mod. It can generate MJ from several different liquids, outputting different amounts of power depending on what it's fueled with. Like any other BuildCraft engine, Biogas Engines need to be activated by a Redstone current. However, unlike other engines Biogas Engines also require a minimum operating temperature to run. To start the engine when it's cold, the player will need to provide the engine with Lava in addition to the primary fuel. The engine will then consume the Lava and start to heat up. Once it has reached its minimum operating temperature, it will start to produce energy.

Producing energy itself generates heat, so burning some fuels (see table below) will keep the Biogas Engine heated without the need of any additional Lava after startup. Other fuels do not produce enough heat to maintain operating temperature and require a constant supply of Lava to keep the engine running. If the activating redstone signal is turned off, the engine will stop burning fuel and begin to cool down. If it cools down too much, it will need to consume Lava again to restart. Even if out of fuel, a Biogas Engine will maintain its current heat level as long as it's being powered by a redstone current (though it won't produce any MJ). Therefore it's recommended to keep the engine with a redstone signal on whenever possible. Biogas Engines cannot overheat.

Biogas Engines can be powered by Water, Milk, Honey, Apple Juice, Seed Oil, or Biomass. The fuel and Lava in the Biogas Engine's internal storage can be collected with a Pipette.

*As of Railcraft version 6.7.0.0, Creosote Oil can no longer power a Biogas Engine.

This page was last modified on 8 February 2020, at 18:46.
Content is available under Creative Commons BY-NC-SA 3.0 unless otherwise noted.