Villages are generated structures added by Minecraft. In FTB, they can appear in almost any biome instead of only Plains and Desert. Forestry, Thaumcraft 3 and Mystcraft add new buildings and villager types, the Apiarist, Wizard and Archivist respectively. Blacksmithy loot may also be altered by modpacks. 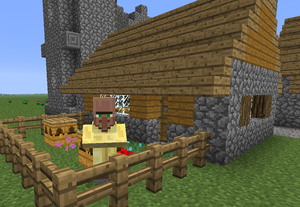 The Apiarist's house is distinguished by the dark golden yellow Cherry Wood Planks used for much of the siding, Candles lighting the interior, and two Apiaries outside in a small fenced yard full of flowers. These contain a mundane Queen (Marshy, Meadows, Wintry, Tropical, Forest, Common or rarely, Valiant) and 0-3 Frames. The Apiarist Villager wears light yellow clothing similar to the Apiarist's Clothes. It's uncommon to find a village without a resident Apiarist, sometimes up to two can be found in a single village.

Apiarists have relatively fair trades, being a good source of Emeralds if you have excess Princesses - particularly Wintry, Tropical or Modest, since all three have strict environmental requirements and/or negative status effects that make them inconvenient to use for cloning pure strains. They are also the only in-game source of Proven Frames. While the Apiarist requests Oak Logs in exchange for an Apiary, Birch Logs, Spruce Logs and Jungle Logs will all work equally well. The full amount must all be logs of a single type. Each Apiarist will offer one kind of Comb, and only that kind of comb, no matter how many trades are performed.

Characterized by the same type of clothes as the apiarist villager, but wearing green. This villager deals with materials that'll make the tree breeder's life easier, with trades ranging from proven grafters, planks of wood and saplings. He can have any type of plank or sapling from forestry and even the ones that come from addon, he's also the only way to acquire the Giant Sequoia sapling.

The Wizard has a multi-level stone tower, similar to the Church building of the Priest but with only a straight tower. The floor of the roof is wood instead of stone, making it easy to distinguish from the air. Chiseled stone blocks mark the corners of each level while Glowstone lights the interior instead of torches. The second level of the tower has a chest with 3-8 stacks of random loot, chosen from the list below.

The Archivist Villager lives in a regular-looking house which contains a number of vanilla Bookshelves alongside a Writing Desk and two Lecterns. On the Lecterns, up to two random Symbol Pages can be found. The Archivist will trade a random Symbol Page for Emeralds, the cost of which depends on the rarity of the page and can vary from 1 to 61 Emeralds. Archivists can be recognized by their violet and yellow robes. They will never have more than one trade available at once.

The cost of a Symbol Page is calculated by taking a base value of 65 Emeralds and then subtracting 64 times the symbol rarity, expressed as a decimal value between 0 and 1. Each symbol has a rarity that is a decimal between the values 0 and 1, where 1 is the most common (high chance) and 0 the most rare (low chance).

Consequently, if we take a symbol with a rarity value x of 1 (= high chance), we get:

The page will cost 1 Emerald.

The value will be rounded, so a page with a rarity of 0.62 will cost 25 Emeralds.

The following additional loot is possible inside a Blacksmith chest. Between 1-7 randomly chosen items are added to the Vanilla ones, an average of four is usual.

This page was last modified on 8 February 2020, at 17:25.
Content is available under Creative Commons BY-NC-SA 3.0 unless otherwise noted.