Aluminium Ingots are used in many recipes such as Lithium Batteries. In addition, Aluminium Ingots can replace some other metals in some of the recipes to make production more efficient, such as Mixed Metal Ingots and Electronic Circuits.

It should be noted that XyCraft's Aluminum and GregTech's Aluminium (note the difference in spelling) are two distinct items that cannot be converted into the other. No GregTech recipes may use XyCraft Aluminum, and vice versa. 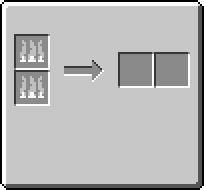 Aluminum vs Aluminium: Although the International Union of Pure and Applied Chemistry (IUPAC) officially standardized on aluminium in 1990, they acknowledged aluminum as an alternate spelling, and both spellings are found in IUPAC's current reference materials. The United States is the main country where Aluminum is widely used over Aluminium.

This page was last modified on 8 February 2020, at 01:37.
Content is available under Creative Commons BY-NC-SA 3.0 unless otherwise noted.