Mystcraft is a mod inspired by the Myst game series. It allows Players to create and travel to dimensions called Ages, as well as the vanilla dimensions included in the game. Players do this by creating Linking Books. In the Mystcraft versions 0.10 and newer, the way of creating Ages has been greatly modified and improved [1]. Mystcraft adds a liquid, Ink which is crafted in Ink Vials, and many other items and symbols. The Getting Started tutorial should help a Player on the creation of Mystcraft Ages.

The official Mystcraft wiki has moved to wiki.mystcraft.xcompwiz.com 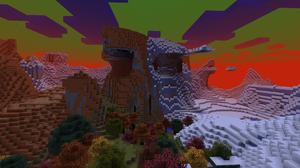 A Photo Taken with ExtrabiomesXL, biomes in a Mystcraft world.

This page was last modified on 16 November 2020, at 01:51.
Content is available under Creative Commons BY-NC-SA 3.0 unless otherwise noted.