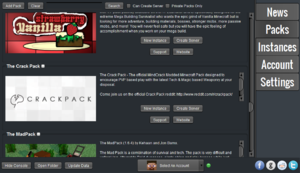 The ATLauncher is an unofficial Minecraft launcher developed by RyanTheAllmighty that allows for easy installation of modpacks, without having to manually install each mod and adjust the configuration. It is similar in its functionality to other launchers, like the Feed The Beast Launcher, but unlike most others none of the available modpacks are created by the launcher developer. Some modpacks were created by only one person, whereas others are maintained by a team of people.

Notable features of the ATLauncher include:

This page was last modified on 19 May 2016, at 12:18.
Content is available under Creative Commons BY-NC-SA 3.0 unless otherwise noted.