The Facade is a class of item added by the BuildCraft mod. It allows a Pipe or ME Cable, to be covered up with the texture of another block, whereby every side of the pipe can be textured differently. The Facade share the same space with the pipe. A Facade may also be used as modular surface decoration for buildings by using a Cobblestone Structure Pipe framework. A Facade is crafted with a vast choice of textures, including most vanilla blocks and several added by a mod. To use a Facade, simply place it on a Pipe and it will hide that side of the Pipe. To detach it 'Shift+Right-click' with a Facade in hand. Furthermore a Facade provides a solid side to a pipe, where buttons, levers or item frames can be attached. A Facade is purely aesthetic and do not prevent pipes from connecting. Placing an inventory or other pipe next to a Facade will let the pipe connect through the Facade [1]. 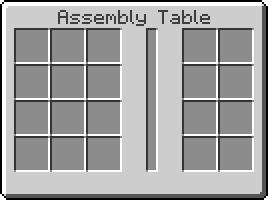 Some textures, such as Marble, Marble Brick, Basalt, and Basalt Brick are not supported. To get a Facade of these textures, use the give command and calculate the ID using the following formula:

For example, the Basalt Brick ID is 215:4 so using the formula:

The first couple minutes of this video will explain Facades.

This page was last modified on 31 August 2020, at 18:28.
Content is available under Creative Commons BY-NC-SA 3.0 unless otherwise noted.