This tutorial is going to walk you through step by step setting up a simple, but fully functional BuildCraft power plant and automatic quarry. The assumption is that you've already sucessfully installed the Buildcraft 3 mod and know how to play Minecraft and that you can take care of your own survival in the world.

Buildcraft is all about creating machines to do all the hard work for you, however it requires some effort on your part to collect the requisite materials and to put it all together.

The first thing to do in a new world is to try and find a suitable site for your operations, and to mine some resources. Have a look around and see if you can find an oil geyser, as you will want to use it later on (though it isn't going to be covered in this walkthrough). In this walkthrough we're going to use lava as a temporary energy source so see if you can find some as you'll set up your first operation there.

*If GregTech 4 is installed, you will need these and many others to craft various machines. Most notably, you will need a good amount of Bauxite Ore and a large amount of Iron Ore as well as some Copper Ore and various others. If GregTech is installed, making a Quarry as this tutorial describes is not nearly this easy unless you are still using the Feed The Beast Beta Pack A.

Now that we've collected our resources and found a nice little lake of lava we're going to start building our system.

Somewhere near your lava you're going to build your powerplant which to start with will use one combustion engine. This will be fed lava to run, and water to keep it cool and stop it exploding violently.

First we're going to create a wooden conductive pipe, then create and place the engine beside that so it automatically connects. Conductive = Kinesis. Which word used depends on the mod version.

Creating a conductive pipe is a two stage job; first you make a wooden pipe, then add redstone to make it conductive.

Now we'll create our engine using the recipe below.

You'll notice that in order to make our combustion engine we require a new part, an Iron Gear. These take a while to make, and you can make these as follows:

You're going to need 4 of these for now, two for the engine, and two for pumps shortly.

The next thing we're going to do is create a pump to get lava to the engine. Create the pump using the following recipe. 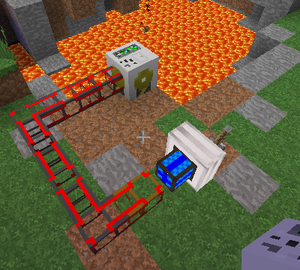 Place the completed pump over the edge of the lava pit. You'll also need to connect the pump to the engine so it has power, which you'll see I've already done in the image to the right.

Similar to the wooden conductive pipe we made earlier, create a bunch of stone conductive pipes. I needed 6 to connect this pump, but you'll need more later, so make a few extra. 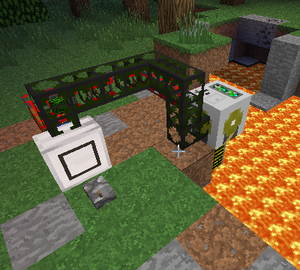 Once we've got the pump connected to the power, we need to create liquid "fluid" pipes to get the lava to the pump.

Create a bunch of stone or cobblestone fluid pipes (Remember not to mix up stone and cobblestone, as they do not connect!) and connect them between the pump and engine as shown.

Combustion engines are dangerous and will explode violently if left without cooling. It is possible to bucket water in to cool engines, but who wants to do that? That's hard work! Lets just use another pump instead to supply water!

Build one more pump as you did above, and a bunch more fluid pipes.

You can pump water from anywhere, but the pump will take source blocks, meaning that eventually you'll run out of water. Fortunately you can create infinite water simply by creating a 3 by 3 pool of water one block deep.

Hook up power and fluid pipes as you did with the lava pump.

If Thermal Expansion is installed in your modpack, as it is with most all FTB modpacks, then you can also use an Aqueous Accumulator to generate water. Create one of these using the recipe found on the Accumulator's page, then place it between two water sources. It will then pump water without needing power or a Redstone current into adjacent waterproof pipes or Liquiducts. Since these are non-BuildCraft items and are a bit trickier to make, this tutorial does not go as in-depth into these items, but these are another solution to the problem of cooling, and oftentimes a more efficient one.

Our generator system is now ready to go, and nice and safe. All we need to do is prime it, and turn it on!

Grab a bucket of lava, and pop it into the engine by right clicking.

Flick the switch you placed beside your engine earlier on to activate the engine, and it will power the pumps too, providing itself with fuel (lava) and water.

The engine will start moving, and soon turn green.

Check out the engine, and you'll see it filling with lava and water.

Okay, so you might be thinking, so this is cool, I've got my engine all set up and running powering... wait, its not powering anything! It's not doing anything useful!

That's true, and we're about to remedy the situation, but as it's not doing anything now we may as well turn the engine off for now.

If you managed to find 11 diamonds earlier good for you. If not, grab your pick and head back down into the depths.

If you've got your diamonds, we can make a fully automated Quarry, to take the hassle out of mining.

IMPORTANT NOTE: If GregTech 4 is installed in your modpack, as it is with the Ultimate Pack, Beta Pack A and numerous others, making a Quarry is a MUCH more difficult task, as instead of needing simply a Diamond Pickaxe, one requires a Diamond Drill. To create a Diamond Drill, one requires some Titanium Ingots and some Steel. To make these, numerous machines and a stable power supply producing lots of EU must be set up, including a Blast Furnace, an Industrial Blast Furnace, an Industrial Electrolyzer and some others. Bauxite Ore will also be very, very much necessary for the creation of Titanium both now and in the future.

In case you haven't figured it out, the gold and diamond gears are made similar to the other gears. You first need Iron Gears, then add gold for Gold Gears, and gold, then diamond for diamond gears. 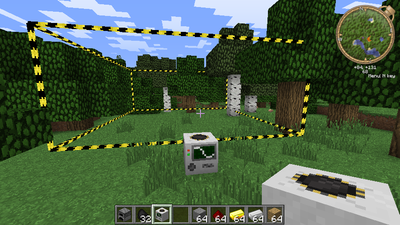 A yellow/black stipe border will appear indicating the area used by the quarry. When you connect power anything within this area will be destroyed, so make sure there is nothing you want to keep in the area.

Craft some more basic transport pipes (you made them earlier, but turned them into the more advanced pipes by adding redstone or hose).

Sit back and congratulate yourself with a cool drink while your machines do all the tedious work of extracting all that ore!

You might notice your quarry is slow; a combustion engine running on lava can only fully power 1 pump at a time and the quarry at about 30%. Feel free to experiment and add more engines or change from lava to fuel to give it all the power it needs to get it up to speed!

If you're really feeling green you can even rehabiliate your mine pit using fillers to back fill the pit with all the cobblestone you produced!

Where to from here you may ask?

Well, running your combustion engines on lava is horribly inefficient, and the lava won't last long.

By now you should be able to figure out how to do this on your own. You'll need a few new items, the refinery, the wooden fluid pipe (needed to extract fuel from the refinery), and a redstone engine to "power" the pipe.

This page was last modified on 3 October 2019, at 17:33.
Content is available under Creative Commons BY-NC-SA 3.0 unless otherwise noted.