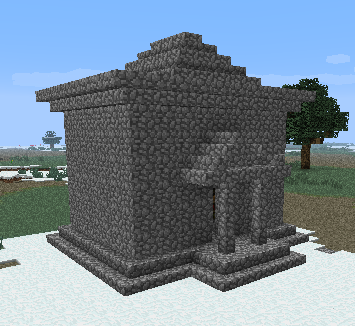 The Abandoned Library is a Mystcraft structure that spawns in every age relatively close to spawn, at the surface. Additional Abandoned Libraries may also spawn. It appears as a cobblestone building with columns in the front. Inside are bookshelves, cobwebs, Lecterns with symbol pages, and a hidden chest with more symbol pages. The player may be affected by slowness by becoming near one.

The Abandoned Library itself generates about 200 blocks away from spawn point, usually making it just outside the visible chunks, so you need to explore a little to find it. If you are in a cave world, you need to dig up to surface, about y = 128, to see it. Additional Abandoned Libraries spawn about 500 blocks apart in seemingly random locations.

There are five lecterns in the Abandoned Library, with up to one symbol page on each lectern for a possibility of five pages. Each lectern will not always contain a page. There will also be a chest hidden in one of the corners of the library, on the wall with the doorway, behind the bookshelves, so digging out the corner bookshelves will eventually reveal a chest. This chest will contain four to eight more symbol pages and, usually, it will also contain a Notebook with even more pages.

Caution is advised when entering an Abandoned Library. Monsters can spawn in the ceiling, which contains cobwebs and is not lit. Thus, it is possible for a Creeper to spawn in the Library, walk off of the bookshelves, land on top of the player and explode, destroying all of the symbol pages that are present in the Library.

This page was last modified on 29 July 2019, at 17:13.
Content is available under Creative Commons BY-NC-SA 3.0 unless otherwise noted.