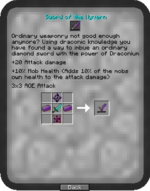 A page from the manual about the Sword of the Wyvern.

Draconic Evolution Information Tablet is an item added by the Draconic Evolution mod. It contains a fairly extensive manual for most of the items added by the mod, including crafting recipes. The manual is opened by holding and using the item. It is composed of a title page, an index with all available topics through which the player can scroll with the scroll wheel and finally a page for each topic which also shows crafting grids similar to NEI where available.

Draconic Evolution Information Tablet has no known uses in crafting.

This page was last modified on 11 October 2016, at 14:21.
Content is available under Creative Commons BY-NC-SA 3.0 unless otherwise noted.