This Concrete is a new decorative block added in the Chisel mod. It has alternate aesthetic styles, which can be chosen using the Chisel from that mod.

It increases the speed of players walking across it, however it also lowers the player a small amount, which can prove problematic when using it as flooring.

Due to its' recipe, it is the slowest of all the Chisel blocks to manufacture in large amounts. Other mods have devices that can mitigate this, such as a Mekanism Basic, Advanced or Elite Factory with Energized Smelter capabilities. 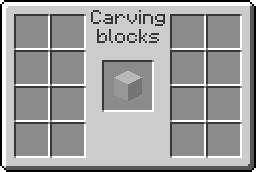 Any variation of a Concrete block provides the same output as shown above when placed into Chisel tool's GUI, which means the player can get the original block back or change the pattern to another one later.

This page was last modified on 19 May 2016, at 14:33.
Content is available under Creative Commons BY-NC-SA 3.0 unless otherwise noted.