The Blizz is a mob added by the Thermal Foundation mod.

A cold and icy looking water Elemental that spawns in cold or snowy biomes on stone blocks at a light level of less than 8. It usually spawns in a pack of up to 4 called a Blizzard. It spawns about 10 times less often as a pack of other hostile mobs [1]. While idle, it wanders around leaving a trail of snow particles. It breathes loudly and also sounds like ice crackling. Upon sensing a Player it will hover and attack by shooting icy bolts that causes 5 points of damage and a Slowness effect. It will pause a few seconds before attacking again. When killed, it drops up to 3 Snowball and a Blizz Rod. The drop rate can be enhanced using a sword imbued with the Looting enchant.

Along with being found in cold biomes at night, the Blizz may also be found in Extra Utilities' Deep Dark. If the Debug Screen indicates that the player is in a cold biome, then there is a chance for Blizzes to spawn around the player. 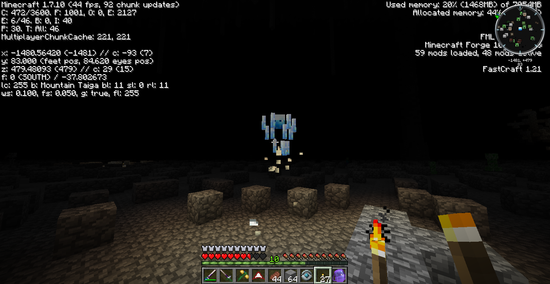 A Blizz in Deep Dark

The Blizz highly resembles the Blaze.

This page was last modified on 22 June 2021, at 00:30.
Content is available under Creative Commons BY-NC-SA 3.0 unless otherwise noted.