This tutorial will teach you the basics of the wondrous Thaumcraft 3 mod. I assume that you've already installed Thaumcraft and know how to manage a survival world. There are many tutorials out there for both of those topics, if you haven't. Let's commence!

Thaumcraft, as you should know, is a modification which adds many magic items, blocks, concepts, and many other things. It might all seem very overwhelming at first, but after a couple of days, things should really make sense to you.

First of all, you should just make a small base, as you would do. You're going to want to do a bit of mining. After a bit you should find a glowing ore with lots of cracks. That should be Infused Stone, and will drop Shards. Make sure it's not Xychorium! Shards are incredibly useful for the Thaumaturge, but for now you don't need that many. Here's a list of things you should collect to start your magic caree

Creating a Casting Wand and Thaumonomicon[edit]

Once you've gathered your resources, it's time to get crafting. First you'll need to craft a Wand, which is an important tool for the Thaumaturge, crafted as follows (any shard will work in place of the Dull Shard):

And once you craft it, the wand should automagically fill itself with Vis. Don't worry about what that is for now! Now you should create a Thaumonomicon, which lists everything you have researched and gives you some very useful tips as well. To do that, you need to craft a Bookshelf. Just place it on the ground and right-click on it with your wand in hand! That should transform the bookshelf into a Thaumonomicon. Now you should just spend a few minutes reading the various tips on it by right-clicking and dragging around, like you would in an Achievements screen. You can click on the separated lighted up symbols and read. Those grayed-out symbols are things you might research in the future, but I'll tell you more about that in a minute.

If you've been reading the Thaumonomicon, you'll know that you can create what's called an Arcane Worktable. Here is how you do that, rundown. First, craft a Table (the recipe shown on the right), and place it down. Right-click your Wand on the Table, and it should transform the Table into an Arcane Worktable. This will allow you to craft some items you wouldn't be able to craft on an ordinary Crafting Table! If you thought your wand disappeared, it didn't. It's in a slot in the Arcane Worktable, to the bottom of the output slot. If you're going to be doing crafting in an Arcane Worktable, you might need your wand in there.

Now you'll be making a Research Table, an extremely important tool for getting you anywhere in Thaumcraft. First, craft two more tables, and place them side-by-side. Now craft Scribing Tools, whose recipe is shown to the left. Now, right-click, with Scribing Tools in hand, on one of the tables, and they should join to form a Research Table! Now you can start researching your first item. Don't be overwhelmed by its GUI; this tutorial should cover most of your questions.

How the heck do I use one of these?[edit]

A blank Research Table GUI with paper
To start your research, insert a few pieces of paper into the Table, as shown in the picture. Now, just to start off with, insert a piece of cobblestone, some iron or a torch into one of the first slots on the left. You can insert anything you want (as long as it has an aspect - press your sneak key (default is shift) while hovering over it, and symbols should appear; if there are none, it has no aspects), but you will have a chance of losing it. Click the magnifying glass, and hopefully an 'Unknown Theory' will pop up in the Output slot. You're far from done, though! You should also see an Obscurus Aspect, or if you're already lucky, an actual Aspect. Keep clicking the magnifying glass icon until the Aspect has reached the outer ring, and has 'sparks' coming out of it. If you're lucky, another Aspect should pop up, and by this time, your Unknown Theory should become an actual Theory that will definitely become a specific item. There should be a map-like icon at the top-left of the box with the ring. Hover over that and it should magnify. If it's showing gobbledygook, it's in the Standard Galactic Alphabet, and you haven't researched enough yet. But if it's in English, read it and it should give you some clues as to what kind of Aspects you might need to put in. Look for keywords like Fire, Light, Metals, Transform, etc. If it's still showing nothing you can understand, you'll just have to put all kinds of things in there. There are a few pages on this wiki with spoilers, but I suggest not reading them as Thaumcraft is a mod where you discover things for yourself, and you might ruin the fun for yourself if you read those wiki 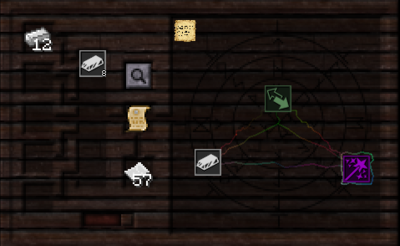 Something being 75% researched
pages. Repeat the process until you get a scroll instead of a page in the output box, and take it out, hold it in your hand, read it if you want to and right-click. It should disappear and you would have learnt that particular thing! Open your Thaumonomicon and it should be in there.

What to do from there[edit]

Once you've got your basics set up, your Thaumonomicon should take you from there, really. Just keep researching, and eventually you will run into cool stuff like more Wands, Cloaks, Tools, and even Golems! Have fun discovering new things.

This page was last modified on 20 April 2019, at 02:50.
Content is available under Creative Commons BY-NC-SA 3.0 unless otherwise noted.