Once you have seen how automation with AE2 works, you're ready for the next level of AE2 mod: autocrafting. This means that you place an order to craft some amount of an item, and the crafting system cares about the rest. This means it either uses source material already stored in your ME Network or, if not enough stored, tries to recursively craft the missing items, too. This can go over a lot of stages and is very flexible and convenient.

A Crafting CPU is the heart of the autocrafting system like the CPU is in your computer. It is the thing that executes autocrafting tasks. It is a multiblock structure that must have the form of a cuboid without any holes and may consist of the following blocks, all built from Crafting Units:

So the minimal Crafting CPU would be a single storage block, but it's reasonable to add at least a monitor and two co-processors to make the CPU useful for practical applications. For the storage, I would start with a 4k Crafting Storage, unless you're really low on resources. You can exchange that for 16k Crafting Storage or even 64k Crafting Storage later if you found the first job that doesn't fit into memory. The storage needed depends on how many levels of recursion have to be done, and how many intermediate items have to be crafted. 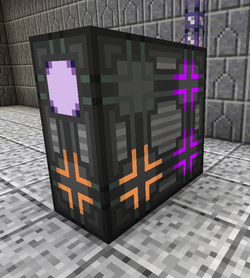 A minimal Crafting CPU can build one item at a time. Each co-processing unit adds the ability to craft another item in parallel, so with e.g. 3 co-processors your CPU can build 4 items at once. This obviously speeds up the whole process, especially if many items have to be crafted.

The Crafting Monitor allows you to see what a CPU currently does, i.e. which job it executes. You can see that information also by switching an ME Terminal to crafting status, but that's not visible at first glance, and you have to switch through your CPUs once you have more than one. And easily seeing the status can be helpful to detect hanging jobs, for example, if a pattern or a machine setup has a bug.

And I would strongly suggest that you have at least two Crafting CPUs on your network. First, because that lets you still place orders while a long-running task is executing. It would be simply inconvenient to wait for the long job to finish before continuing, wouldn't it? Another reason for a second CPU is Crafting Cards: If you had only one CPU and a machine used by one of its recipes must first craft an input item by crafting card, there would be no CPU to execute that crafting task, because the only CPU is already busy. The result would be that the jobs hangs and waits indefinitely for the card-initiated crafting to take place.

On the other end, experience shows that even in a quite large network it's sufficient to have 6 Crafting CPUs with 16k storage and 4 coprocessors each, except for one with a 64k storage module for large jobs. Feel free to build more and bigger CPUs if you can afford, but it's not necessary until you hit some limitations.

Most probably you're already using an ME Terminal or ME Crafting Terminal to access items on your network. Now for autocrafting you will meet two more kinds of terminals.

First, the ME Pattern Terminal is used to create encoded patterns from Blank Patterns. Those patterns are used inside ME Interfaces to instruct the associated machine or Molecular Assembler what to do.

This page was last modified on 14 March 2021, at 14:29.
Content is available under Creative Commons BY-NC-SA 3.0 unless otherwise noted.