The Blank Slate is an item added by the Adventurer's Amulets mod and used as a Runic crafting material.

Once crafted, the Blank Slate can be used to make one Belt Slate, Pendant Slate, Ring Slate, or Focus Crystal Slate to create the baubles or focus crystals needed.

If you did not know which direction is North (important for other Runic recipes that will have different crafting materials on each side), where the Blank Slate appears will be the North side.

This is only to display the blocks and pattern to place in the Minecraft world. It cannot be made in the Crafting Table and will have to be physically placed (not dropped) around the Rune of Crafting. 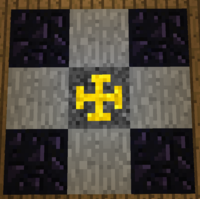 To craft the Blank Slate, you will need the Rune of Crafting, four Stone blocks and four Obsidian blocks.

Place the Stone blocks on all four sides of the Rune of Crafting and the Obsidian blocks at the corners.

If everything is set up correctly, right-click the Crafting Rune and the items will disappear and the Blank Slate will appear.

Blank Slate (Adventurer's Amulets) can be used to create the following items:
Category:

This page was last modified on 19 May 2016, at 13:46.
Content is available under Creative Commons BY-NC-SA 3.0 unless otherwise noted.