Biomes O' Plenty is a mod which introduces 80 new biomes and 12 sub-biomes to the game, many of which have new blocks, mobs and biome-specific plants compared to vanilla world. To create a world with Biomes O' Plenty biomes, world type "Biomes O' Plenty" should be selected instead of "Standard", "Superflat", etc.

This mod also adds more variance to tools and armor, new equipment and plants and food, new sources of color, new ranged weapon and some other engaging blocks to build with.This mod is also compatible with Mystcraft, as most of the biomes (with few exceptions) can be found as pages.

The following biomes are added by the mod. All information is based on the default configuration.

Note: Tables are sortable! Click the headings to sort by that value.

The following biomes can all be found in the overworld, assuming a default config is being used. Any of these biomes, as well as the vanilla biomes, can be toggled with the Biomes O' Plenty config file.

Sub-biomes are smaller biomes contained within regular overworld biomes. They exist to add more variation to each biome.

The Promised Land is a dimension added by Biomes O' Plenty, accessed by crafting an Ancient Staff. This dimension has 3 different biomes, listed below. 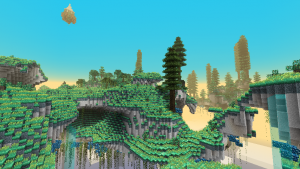 Biomes O' Plenty adds 6 new gems to the game along with their corresponding ores. The gems added include Ruby, Peridot, Topaz, Tanzanite, Apatite, and Sapphire. All of the gems have entries in the ore dictionary except for Apatite (for balancing purposes with Forestry's Apatite). Their rarity is the same as that of the vanilla Emerald and can be found spawning between y=4 and y=32. Like the Emerald, all the gems added by Biomes O' Plenty can be found only in biomes of a specific type, listed below. They can also be found as loot in temples and dungeons. The Fortune enchant works on all of the ores, giving the player between 1 and 16 gems with Fortune III.

The gems have two uses beyond decoration. They are required to craft the Ancient Staff to access the Promised Land and they are used in the Sacrificial Altar to summon an Ender Dragon. All 6 gems must be found to create either of these things.

There is also a 7th gem, Amethyst, which can only be found in the Promised Land. It can be used to craft tools and armor at a tier higher than Diamond. It can also be used to craft an Amethyst Bucket that can pick up Spring Water.

Biomes O'Plenty has specific locations for gems when using the default config. The gems are all found in biomes of a specific type:

The following is a list of specific biomes in which gems can be found.

Biomes O' Plenty adds a lot of plants and new kinds of stone and soil to the world generation. The following are added by the mod:

Most flowers can be made into dye of their respective colors.

The Sacrificial Altar is a multiblock structure that is used to summon an Ender Dragon. It requires a villager sacrifice on the altar to start. More than one Ender Dragon can be summoned at once, but will require additional sacrificial altars, as the summon causes an explosion that destroys the altar. The dragon can be spawned in any dimension, but may have unexpected effects if spawned outside of The End. Keep in mind the dragon will destroy any block it flies through that isn't Obsidian or Bedrock so spawning it near something important is not a good idea. The altar requires 4 Altar Frames, one Sacrificial Focus, a Soul Manipulator, and 4 of each of the 6 gems. It will also require 3 Wither Skulls for the Ghastly Souls to be used in the focus and the soul manipulator. The Sacrificial Focus requires Celestial Crystals which means the player will have to venture into the Promised Land before the Sacrificial Altar can be built.

This page was last modified on 22 January 2021, at 17:58.
Content is available under Creative Commons BY-NC-SA 3.0 unless otherwise noted.