Bedrock Dimension is a dimension added by KAMI module of Thaumic Tinkerer 2 mod. To get to this dimension, touch Bedrock Portal. It mainly consists of Bedrock and can look useless at first.

Bedrock Dimension from the top.

This dimension is filled with Bedrock from levels 1 to 256, without any caves, ravines, openings and so on. The player will even spawn in this world inside a block of Bedrock. However, Bedrock Portal will be generated above the player's head, so if the player entered the dimension without Awakened Ichorium Pickaxe, the player can still get out by simply jumping once. There could be a problem that the block the player has appeared in will be not visible, and the player will be lagging in it. To fix this problem, simply relog. 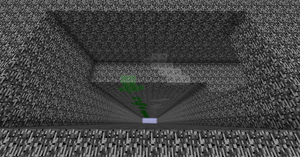 To mine in this dimension, you need Awakened Ichorium Pickaxe. Fortune III is recommended on the pickaxe. You can also go with Silk Touch, but this is more time consuming as you will only collect ores in this dimension and nothing else. So better to Fortune them at first than first to mine with Silk Touch and then to Fortune them. It is also highly recommended to equip something that can fly, preferrably Robes of the Stratosphere or Angel Ring. Also equip a lot of backpacks, pouches and so on because you will fill your inventory with less than 1 vein. The strategy below is not a must, but it turns out to be most profitable and most of the players tend to use it.

As the ore vein goes from top to bottom, after collecting it all with Fortune III you will get:

As the Quarry from BuildCraft tries to mine any block, it will not work here as it cannot mine Bedrock. So the following part is about setting Ender Quarry.

This page was last modified on 30 July 2018, at 12:06.
Content is available under Creative Commons BY-NC-SA 3.0 unless otherwise noted.