The Automatic Crafting Table MkII is from the TubeStuff mod by Immibis and is an upgrade to the Auto Workbench from BuildCraft. It can automatically craft items and has an internal storage so that it can hold other items than those needed for the crafting recipe as well. 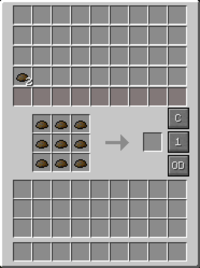 The GUI of a Automatic Crafting Table MkII with a recipe for scrapboxes and 2 Scrap in it.

The user interface of an MkII is divided into two parts: one for the inventory (top), the other for the crafting recipe (bottom). Every item that gets into an MkII will be deposited in the inventory part. Note the slightly red last row of the inventory. That is where empty buckets will be placed when crafting items with filled buckets (also see Automation).

For setting the MkII's crafting recipe, you have to take up an item stack (size does not matter) and either left- or rightclick one of the empty slots of the crafting grid. Note that items that were placed in the crafting grid will still be in the item stack you used - another advantage over the regular Autocrafting Table. If you placed an item wrong, simply leftclick the misplaced item and it will disappear from the crafting grid. To clear the whole grid, you can use the "C" button on the right-hand side of the crafting grid. If an item can be crafted with similar items (e.g. wooden planks to sticks), click the "OD" button after entering the recipe. This will enable the use of Minecraft Forge's ore dictionary so that all these different items (in the example: birch planks, oak planks and so on) can be used to craft the recipe's result (in the example: sticks).[1]

You can determine whether the Automatic Crafting Table should stop after crafting one item or after the output slot is full. To do so, you can click the "1" button (see picture, right below the clear button mentioned before). "1" means that this crafting table will craft one item and wait until it's pulled out, "64" will make it craft until the output slot is full (e.g. 16 signs, 1 wooden door, 64 sticks).

Unlike the BuildCraft Autocrafting Table the Automatic Crafting Table MkII is able to interact with RedPower Machines (like Filters, Transposers or Relays) and Tubes (such as the Pneumatic Tube) as well as with ME Export- and ME Import Busses.

To pull an item out of the MkII, you have to put a Wooden Pipe (or a similar machine/pipe) on the top of the MkII's block. Everytime the pipe (or machine) tries to pull out an item, the Automatic Crafting Table MkII crafts another item as long as the ingredients are available. The input sides are every side except the top. Ever input side has its own row in the MkII's internal storage. The red row is for the bottom side of the Automatic Crafting Table MkII. Containers (such as buckets) which are being used in the crafting recipe will be placed there and can be pulled out from the bottom side at any time.

This page was last modified on 25 April 2019, at 12:37.
Content is available under Creative Commons BY-NC-SA 3.0 unless otherwise noted.