The Auto-Spawner is a machine from MineFactory Reloaded which can spawn creatures when supplied with power, Essence, and a Safari Net storing a captured mob. Like any other powered MineFactory Reloaded block, it may take either IndustrialCraft2's EU power (at any voltage), BuildCraft's MJ, Universal Electricity power or COFHs' Redstone Flux.

Its single slot is used to store the Safari Net. Mobs stored in a Safari Net (Single Use) will not work in the Auto-Spawner. While the block itself is not especially expensive nor difficult to produce, it does compensate for this by requiring a large amount of energy per spawn. Additionally, it requires Essence to run. 150 mB of Essence are required per spawn (500 mb for exact copy), while the Grinder only generates 100 mB per mob, meaning that, when using a Grinder, essence from three mobs is required to spawn two mobs with the Auto-Spawner.

In newer versions however, the auto-spawner as well as the grinder received some balance updates, as a player could easily exploit the spawner with sewers and fake players / Melee Turtle combo, giving more essence back than what was required to spawn the mob in the auto-spawner. The grinder now gives the same essence as a melee turtle, or fake-player kill. In the newer version, the amount of essence to spawn a mob varies with the work units required by the machine, which in turn varies based on the mob.

For the Auto-Spawner to function, enough room has to be provided for the mob type in the Safari Net to spawn. A 9x9x5 room (with the spawner in the center on the floor) is large enough to hold most mob types, and will ensure that they do not escape. 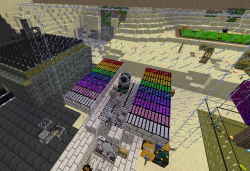 An Auto-Spawner being used with Conveyor Belts in a Skeleton mob farm.

It is possible to construct a fully automatic mob farm using the Auto-Spawner and other MineFactory Reloaded machines. Auto-Spawners can be used as a mob source and Conveyor Belts can transport the mobs to a Grinder, which will kill the mobs and collect their drops and essence. The essence can then either be used to supply more Auto-Spawners or an Auto-Enchanter.

Auto-Spawner has no known uses in crafting.

If Melee Turtles, Autonomous Activators (with unbreakable weapons such as reinforced X on tinkers' construct broadswords) or other experience orb dropping machines are used to grind the mobs and these experience orbs are converted to mob essence by a Sewer, the Sewer generates 500 to 800 mB mob essence per mob. This means that, even if the Auto-Spawner is making exact copies, enough mob essence is generated to sustain the Auto-Spawner. This is fixed in newer versions.

This page was last modified on 31 July 2018, at 08:53.
Content is available under Creative Commons BY-NC-SA 3.0 unless otherwise noted.